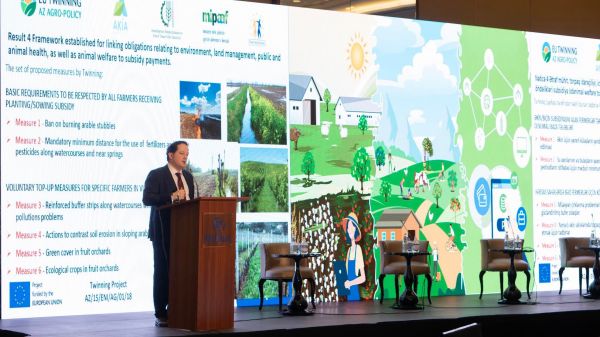 The Closing Conference of the Twinning project sucessfully took place in Baku on 27th of April 2022. Over 100 participants attended the meeting.

The results of Twinning project, financed by the European Union, “Strengthening the capacity of the Ministry of Agriculture to improve effectiveness and efficiency of state support to agriculture" were presented on 27th April 2022 in Baku by RTA Mr. Riccardo PASSERO.

Achievements: The Project supported the ongoing efforts of the Ministry of Agriculture to modernize the agricultural sector and enhance its performance as part of the Government of Azerbaijan economic diversification policy. In using some of the EU's agriculture and rural development policy principles and best practice, the Project addressed a variety of sectoral challenges identified by Azerbaijan. These included measures to link public support more effectively to sector policy objectives, improve environmental standards through introduction of good agricultural practices, defining the legal base for new support schemes in arable crops, livestock sector and farm-based agritourism, increasing the knowledge in rural development programming and in methodology to collect farm data statistics, enhancing electronic information systems to better serve farmers while improving transparency and control of subsidy payments, also with the use of modern remote sensing technology.

Closing Conference:  The event was opened by the Deputy Minister of Agriculture Ms. Ilhama GADIMOVA, by the Deputy Head of EU Delegation to the Republic of Azerbaijan Mr Zoltan SZALAI, and by AKIA Chairman Mr. Seymur MOVLAYEV, with the participation of Ambassadors of Italy Mr. Claudio TAFFURI, Lithuania Mr. Egidijus NAVIKAS, and Poland Mr. Rafal POBORSKI.

The RTA Mr. Riccardo PASSERO and the RTA-Counterpart Mr. Farid AMIROV presented the results achieved by the Twinning Project.

Ms. GADIMOVA said: As a result of the policy pursued by the country's leadership, agriculture, which, along with other economic activities, is the leading sector of the non-oil economy, has entered a qualitatively new stage of development. It was noted that thanks to systematic reforms in this direction in recent years in Azerbaijan, including the high level of public care, agricultural production indicators have been steadily increasing.

It was noted that the work of the Twinning Project, which has been successfully implemented in the framework of the cooperation with the European Union, also plays an important role in agricultural management, achieving its clear priorities and goals. It was noted that the activities carried out during the implementation of the Project on the 3 Components will contribute to the development of rural areas, increasing the effectiveness of support measures and productivity, as well as achieving a better management of public funds through the proper use of support tools, included the production of quality products that meet safety standards and the protection of land and water resources while maintaining the ecological balance.

In addition, the Deputy Minister noted that the continuation of cooperation with international organizations and the introduction of best practices in the country has always been a priority for the Ministry. It was noted that cooperation in the field of rural development, strengthening the competitiveness of agricultural sectors, developing the agritourism sector and studying and applying international best practices in the field of small farms joint activities could be further expanded.

Mr. MOVLAYEV informed about the work done in cooperation with the European Union over the past three years for the successful implementation of the Twinning Project, the measures taken and areas for future cooperation. He also noted that significant work has been done to achieve the objectives set during the Project, based on EU best practices, in the three components, including the improvement of the Ministry's subsidy policy, rural development introduction and better administration of subsidy payments. This work was mostly related to the development of the Small Farmers Scheme (SFS) and Single Payment Scheme (SPS) for reforming the current "planting/sowing subsidies" aimed at expanding land consolidation and achieve simplification. Furthermore, analysis for implementing a "Rural Development Programme Framework" in Azerbaijan and identification of the relative steps to be taken in the future, the preparation of guidelines for agritourism, including an Action Plan for the launch of a national agritourist system in Azerbaijan, all contributed the overall successful implementation of the Twinning Project which was able to increase the efficiency and effectiveness of the State support for agriculture and rural development, reducing regional disparities and improving rural livelihoods by facilitating farmers' access to financial support.

In addition, the chairperson of AKIA noted his interest for future cooperation in areas such as measuring the impact of the government supporting measures, as well as developing rural development programs based on the experience of EU Member States and management of the subsidy system with advanced technology.

Mr. SZALAI declared: Today’s agriculture faces a variety of challenges including environmental degradation, climate change and supply change disruptions.  Sustainable food systems are key to addressing these challenges. The European  Union’s “Farm to Fork Strategy”  sets out targets for EU agriculture to become more sustainable with ambitious targets for reducing fertilizer and pesticide use by 2030. Dedicated EU funded research is expected to deliver innovations that help to achieve these targets without loss of productivity and income for EU farmers. The EU agricultural policy supports meanwhile the move to an overall more climate neutral and green agriculture as part of the EU’s Green Deal – namely to make Europe climate neutral by 2050.

We reach out to our partners, such as Azerbaijan, to join us in this effort and share our experience. Today’s Twinning on Agricultural Policy Strengthening is a great example for such cooperation. Here colleagues from the Italian, Polish and Lithuanian Agricultural Administrations have succefully worked with their Azerbaijani peers for 36 months on ways how EU agriculture and rural development policies can help Azerbaijan achieving its sector objectives. It is now for Azerbaijan to decide how it can best use the results of this Project to modernize its agriculture while preserving its unique diversity and rich traditions. The EU stands by to continue cooperation with Azerbaijan in this sector which is so important for the  socioeconomic development of its regions and diversification of the country’s economy.