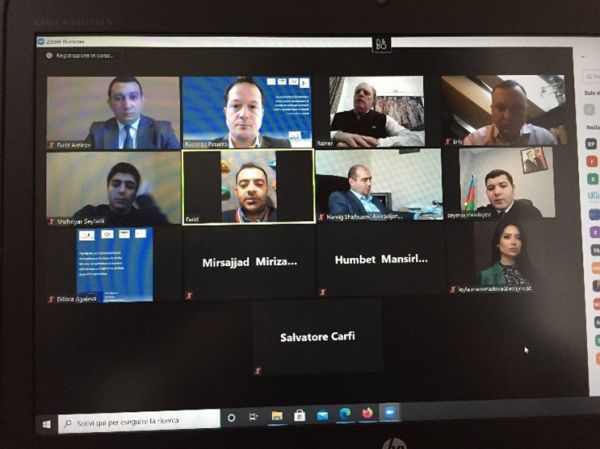 The sixth meeting of the Project Steering Committee (SC) of the project took place on December 15, 2020. Due to travel restrictions related to the pandemic, the SC meeting was organized online via Zoom platform in order to allow the participation of the Members located in the EU.

Azerbaijani staff and the RTA Mr Riccardo Passero participated from the AKIA office in Baku.

The 6th Quarterly Report covering 1st of August– 31st of October 2020, an overview of the future activities for the fourth semester covering 1st of November – 30th of April 2021 and proposed extension period were presented by the Resident Twinning Adviser Mr. Riccardo Passero based in Baku.

Concerning the activities implemented during the 6th quarter, five indicators of achievement were completed:

Indicator 2.1 “Report on alternative support measures (focus on livestock subsidy options)” was achieved. The final version of this Report was completed at the beginning of August 2020, with n. 6 alternative livestock measures proposed (two for sheep, one for buffalo, one for cattle and two for beekeeping) together with detailed procedures for their implementation.

Indicators 1.2 “Report on the analysis of the current domestic support and related conclusions” and 1.3 “Report and conclusions on possible areas of conflict with the WTO” were both achieved, with an analysis of the current subsidy system and farms structure in Azerbaijan. The Report highlights that the existing subsidies fall under the WTO Amber box definition and initial policy reform proposals were presented to gradually improve the efficacy and effectiveness of the current interventions.

In general terms, the proposed new architecture for agricultural support in Azerbaijan, presented by the RTA Mr. Passero, could be design around the following pillars:

Introduction of the necessary Rural development measures (call for applications) to accompany subsidies, aiming at:

The RTA Mr Passero presented a Roadmap as well to be applied in order to fulfil the WTO Green Box Commitments. The roadmap is divided into three phases to switch part of the domestic support classified from Amber box into Green Box category. For every stage, based on official WTO and available local data, a quantification of the Amber box reduction was calculated by Twinning.

This activity on policy reform will continue during the next months in consultation with BC authorities. The aim is to provide, as foreseen by the Twinning fiche, for a “Report on the necessary Switch actions from WTO Amber to Green box (result 2.2)” and the proper “draft of the new subsidy measures (result 2.3)”.

The activity that Twinning is carrying out on “policy options” is mainly aimed at providing solutions applicable in Azerbaijan, taking in account the local context. The proposals consider good practices developed in the EU and the WTO principles, but always bearing in mind the local context and the priorities set by the Azerbaijani Authority.

Furthermore, during the 6th quarter, Indicator 6.2 “Report containing advice on how EU Rural Development framework may be used/adapted by Azerbaijan” was achieved. The activity was remarkable and involved several consultations with BC side (especially with local authorities and DAIMs). As previously decided, the idea was to test the EU Rural development model in two pilot areas for the definition of the local strategy and identification of the intervention measures. The Report was completed during the 6th quarter with the effective definition of two pilot Rural Development programmes for the regions of Ismayilli and Lankaran and an explanation of the functioning of the “EU Project Management Cycle” for Rural Development, which is a new concept in Azerbaijan in public intervention.

Indicator 6.3 "Report with proposal concept and a draft of Rural Development measure fiches" was achieved. The content of these measure fiches was identified in consultation with BC authorities and local DAIMs and according to the local rural development strategies prepared for Ismaylli and Lankaran. A total of n.10 technical measure fiches based on EU guidelines, and customized to the Azerbaijani context, including eligibility conditions, eligibility of expenditure and selection criteria for the following Rural Development measures were prepared, as follows:

4. “Projects associated with the maintenance, restoration and upgrading of the cultural and natural heritage of villages” in Lankaran region.

6. “Creation and development of agritourism activities on farms” in Ismayilli Region.

7. “Basic services and quality of life” in Ismayilli region.

Moreover, Indicator 8.1 is ongoing in the 7th quarter “Legal base for administration and control of subsidy payments in line with IACS principles and proposal for further alignment with relevant EU legal base”. An advanced draft was provided with reference to planting/sowing subsidy (which account for 81% of total subsidy budget allocation in Azerbaijan). An analysis of the current procedures for administration, payment and control of such subsidy was conducted, together with the proposal of corrective checklists (for the short and medium-term) in order to align as much as possible, the current planting/sowing subsidy management to IACS principles.

As a result of this analysis, four stages of the current “planting/sowing subsidy” were found not to be compliant with IACS principles. One of the most relevant issues that were found: the insufficient control of the application documents and related data entry. To solve this issue, the mentioned Report (for result 8.1) presented some concrete administrative solutions that could be implemented in the short-term at DAIM level and by AKIA. Furthermore, the document proposed a practical solution to integrate, in a systemic way, the existing satellite remote-sensing functionalities with the control’s procedures of land-based subsidies.

Overview of the future Activities.

During the ongoing 7th quarter, the 3rd Rolling Work Plan was approved on the 2nd of September 2020 and Addendum No.2 was signed and approved by the Delegation at the end of November 2020.

A Mission on Result 2 Indicator 2.2 was held in early December 2020, with 2 STEs and 10 working days consumed. The purpose of the mission was the preparation of a Report containing advice on “Switch actions” (actions needed to transform part of the current subsidies from amber to green box) to be done in order to comply with Green Box requirement to obtain access to AoA Art. 6.2.

RTA further detailed the proposed timeline of activities to be conducted in the 4th semester (until 30.04.2021) and activities that could be carried out during the extension period. He noted that consultations with BC team would be necessary before every mission and every action taken.

EUD provided information about the extension of the project that EUD fully supports but it is still to be formalized.

At the end of the meeting, SC members approved the 6th Quarterly Report, thanking the RTA for the excellent work conducted so far.